In some UT facebook group (forget which, this was before the pandemic) they were discussing the Burger Wars map for ut2004 and I got a request to edit the one for ut99 with UTDM-monsters, so I went looking and discovered ZenCoder made 4 different versions of it... 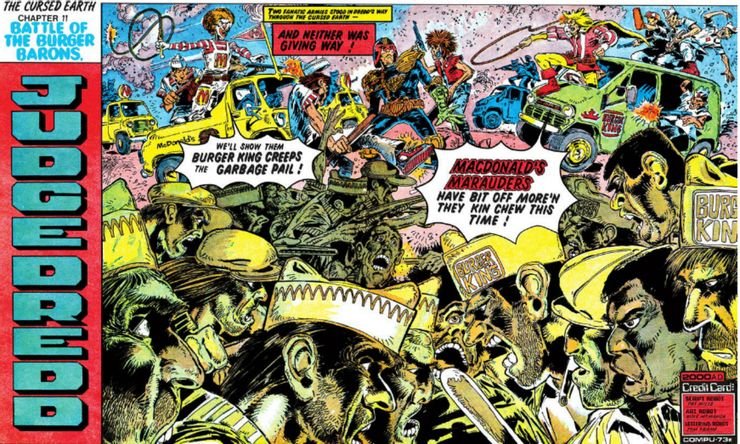 ...and as there are 3 different types of UTDM-monsters, I decided to do 1 kind for each and possibly 1 with all of them.

Along with those, I added ut2k4 cannons to 2 of them and updated the textures (these maps were all made in 2000 & 2001) plus did a little research into the mascots of both franchises, both for naming the UTDM-monsters and for the windows. See, ZenCoder used the same texture for all the windows but some of the windows are ½ as wide, so (much like the restaurants had when I was a kid) I figured to put images of the mascots in those thinner windows.

Changed the music too.

Nelsona updated the pathing on each map.

I made the UTDM-monsters as fat as I could for 3 of the maps, and only slightly less fat on 1. Because of all the fast food, though that last one has a lot more activity on it so I figured they were getting more exercise there! 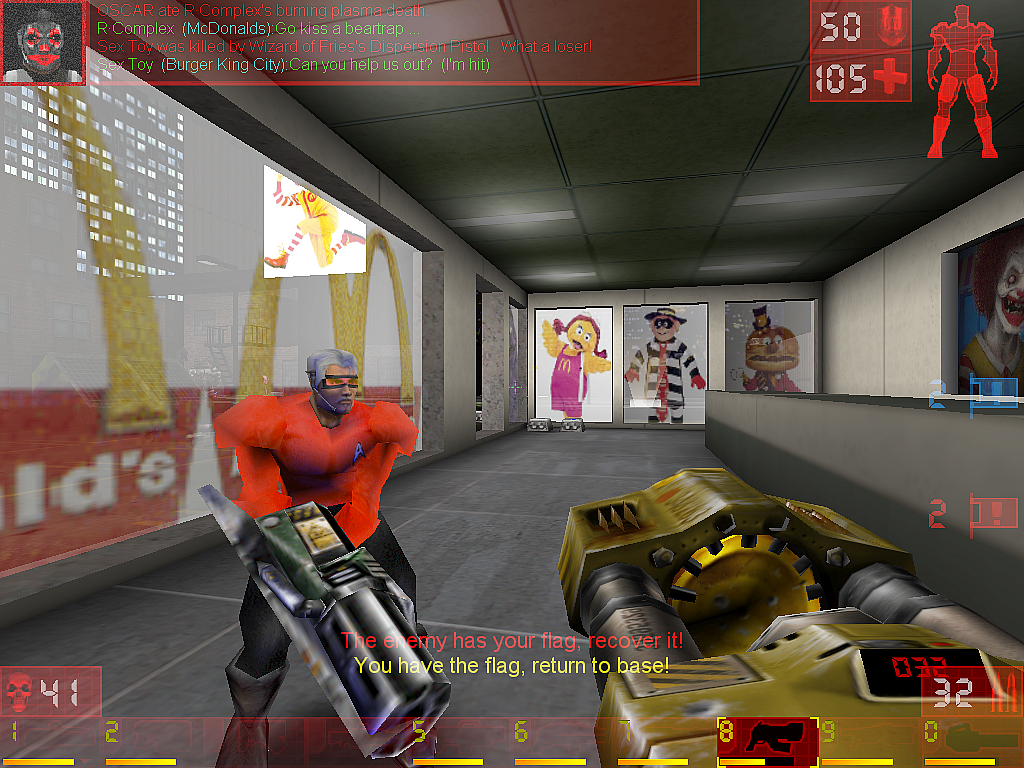 CTF-UTDMS-BurgerWars
This is a medium sized map, bases are not exactly symmetrical. You can run across the distance between or access the other side via an underground tunnel. Bases are guarded by SkaarjBerserkers.

CTF-UTDMT-BurgerWars
This is a large map and the bases are not at all symmetrical. This is the one where the flags are not in the restaurants but in 2 bases high above ground level. ZenCoder originally had Quantum Jets on the map but I replaced them with redeemers for SLV players, although that's still tricky.

SLV can take the flag from the Blue Base but I don't care how good a pilot anyone is, there's no chance in Hell they can fly safely into the Red Base. It's far too narrow in there.

Near to where the flags are there's really fat Titans.

ZenCoder put a bot directly onto the map, an Unreal1 model skinned like Ronald McDonald... and it's on the Red Team. To even up any teams that play, I did the same for the Blue Team... 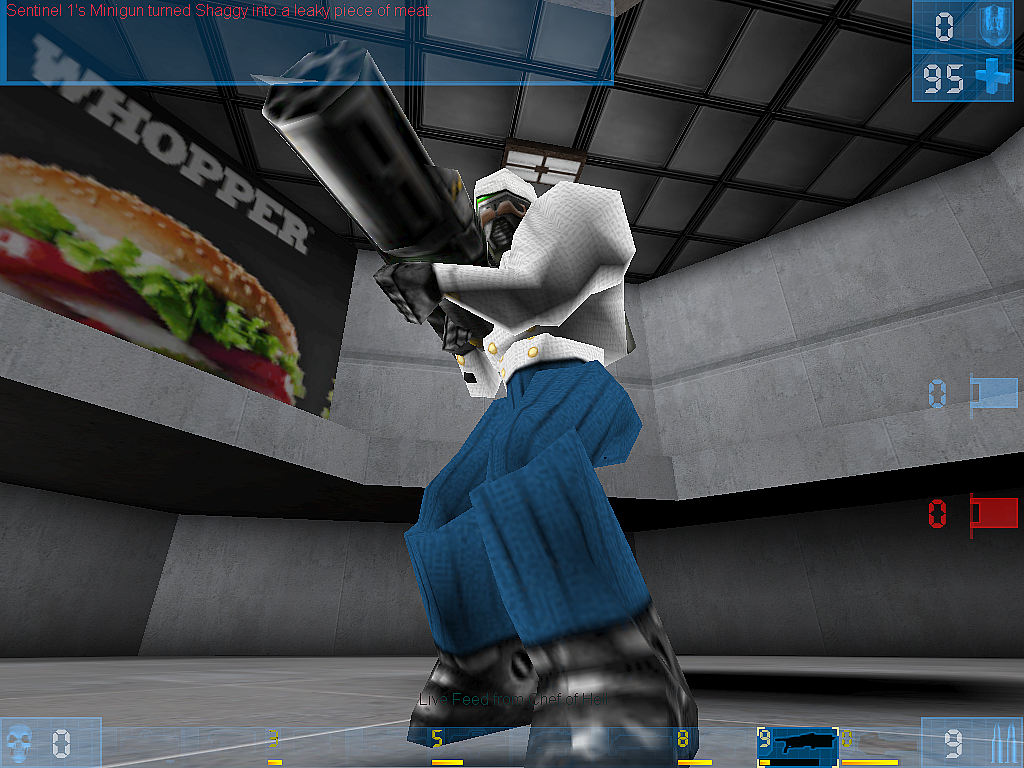 ...got permission from paperCoffee to use his Chef of Hell skin.

There was 1 thing on this map I couldn't figure out how to fix (probably really simple) but it's hard to see unless you know where to look, figured that wasn't such a big deal.

CTF-UTDMW-Cannons-BurgerWars
This is a large map with more or less symmetrical bases. Each base is guarded by a ut2k4 cannon just outside the restaurant, and there's a really overweight Warlord pacing back and forth not too far away. 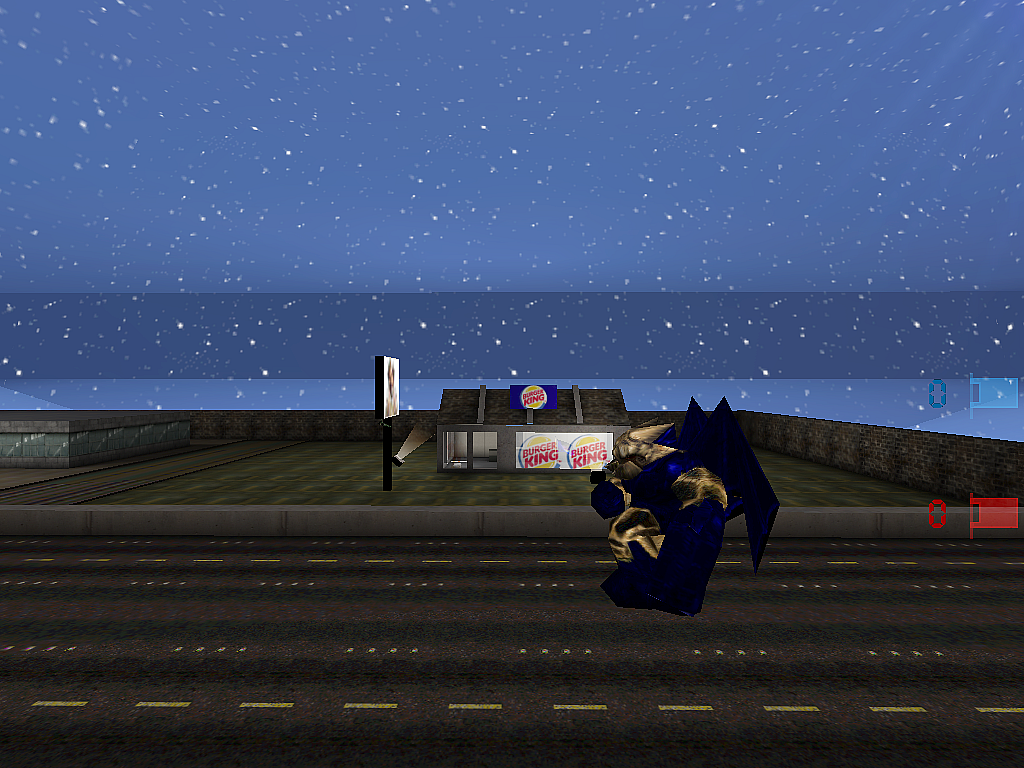 CTF-UTDM-Cannons-BurgerWars
This is a fairly small map with symmetrical bases, which for some bizarre reason I decided to put all UTDM-monsters on. Each base has a SkaarjBerserker inside it, there's a Titan guarding one and a Warlord guarding the other. Just inside the door there's a ut2k4 cannon situated to shoot at anyone not on that base's team that passes near a line-of-sight of that door. 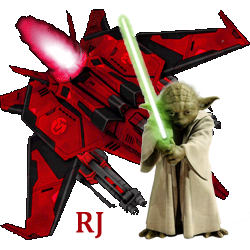 Re: Burger Wars in CTF

we have a couple versions of this map. Looks cool!